A bond has been set for the husband of Food Network star Ariel Robinson, who has been accused of killing the couple’s 3-year-old foster child. Details inside…

A Food Network star and her husband are looking at years behind bars after accusations that they killed their 3-year-old foster child.

A judge reportedly set a $150,000 bond for the husband of Food Network star Ariel Robinson, who is charged with homicide by child abuse in the death of the couple’s 3-year-old foster daughter. Ariel Robinson – a former middle school teacher – gained notoriety after she won the Food Network’s show “Worst Cooks in America.”

Jerry “Austin” Robinson has been accused of killing his foster daughter. He will be under house arrest where he has to have a GPS monitoring device attached to his leg and he can not have contact with anyone under 18 years old.

Both Austin and his wife Ariel were charged with charged with homicide by child abuse for the death of their foster daughter Victoria “Tori” Smith in Simpsonville, South Carolina.

According to reports, Victoria was found unresponsive at the family’s home in Simpsonville on January 14th and died at the hospital. The couple is being accused of inflicting a “series of blunt force injuries” to the 3-year-old child.

During the court hearing, it was revealed the couple originally told first responders they believed the child had choked on water from drinking too much. Later, Austin told police that on the day Victoria was found unresponsive, Ariel allegedly hit the child with a belt. He claims he heard the commotion from outside and told Ariel she had gone too far.

On the day of Victoria’s death, Ariel Robinson told authorities that Victoria’s 7-year-old brother had caused the bruising on her body, according to testimony in court.

Officials say the Robinsons were in the process of adopting Smith and her two brothers. She was still in the custody of the Department of Social Services at the time of her death. Kednocker-Sustakovitch testified during court that while Austin Robinson had been cooperating with authorities since his arrest, it doesn’t take away that Victoria is still dead and he didn’t act when he heard the beating and even lied to dispatchers when he called 911.

Austin Robinson’s attorney said his client was “extremely remorseful” and is willing to testify if the case goes to trial.

The Food Network pulled Season 20 when the murder first came to light.

Such a tragic situation! 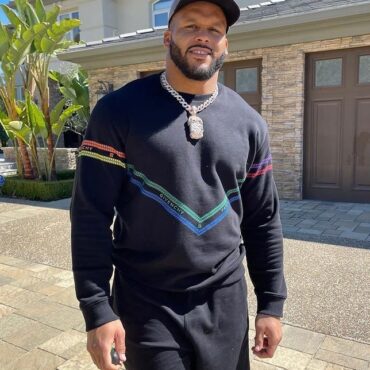 The man who accused NFL star Aaron Donald of assault is now recanting his story. He claims he mistook the Rams player for his attacker and he’s sorry for it. More inside… Plot twist! The man who accused NFL player Aaron Donald has reportedly changed up his tune. After accusing the Rams player of assault, he’s now offering up an apology after he mistook Aaron for his attacker.   BREAKING: […]