Blueface Accuses 6ix9ine of Being a Snitch, Getting His Instagram Deleted

Blueface and 6ix9ine are going back and forth on social media — if anyone cares.

In the latest chapter of their ongoing feud, Blueface took to Twitter on Sunday and accused 6ix9ine of being a snitch and getting his Instagram account deleted.

“Pay close attention,” Blueface wrote in a tweet. “He reported all my post for bullying and deleted his skit. Playing victim like he did in court. My IG be back up shortly.”

“Mans came for me got his feelings hurt so he did what rats do an snitched,” he continued in another post.

The tweets come just two days after 6ix9ine trolled Blueface for getting a tattoo dedicated to his favorite jeweler across the side of his head.

When DJ Akademiks shared a post about the tattoo in question, 6ix9ine took to the comments to give his thoughts on the matter.

“He definitely owed them money for unpayed [sic] jewelry,” wrote 6ix9ine in the comments, leaving an additional “NYC Luxury” comment followed by crying-laughing emojis. For what it’s worth, Blueface replied in the comments using his unverified account. “You literally trying to [sic] hard to stay relevant,” he wrote.

From there, 6ix9ine trolled Blueface again with a brief comedy sketch shared to Instagram. “One hit wonder problems,” he wrote alongside the clip.

In the video, 6ix9ine is checking out a chain when he asks how much it is. “Only 200,” the jeweler replies, to which 6ix9ine suggests he doesn’t have the money. “You know what to do.” He then has his head pushed to the glass at the jewelers as someone writes “NYC Luxury” on the side of his head.

After seeing the clip, Blueface responded by suggesting he would like to fight the “Gummo” rapper. “Beat a female up but won’t even mention a fight with me now that’s bitch n***a problems,” he wrote, tagging 6ix9ine alongside a photo of injuries the rapper’s ex-girlfriend Sara Molina allegedly sustained in an incident with him. As TMZ reported last month, Blueface has signed on for a bare-knuckle boxing match on July 23 against TikTok comedian Kane Trujillo, which explains why he’s eager to fight 6ix9ine.

The post Blueface Accuses 6ix9ine of Being a Snitch, Getting His Instagram Deleted appeared first on LOVEBSCOTT. 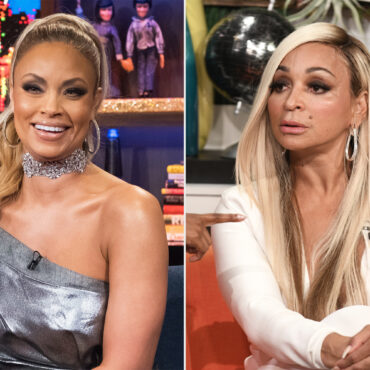 ‘The Real Housewives of Potomac’ is back and it looks like the girls are coming for the Bravo crown! via People: During Sunday’s season six premiere, Gizelle Bryant and Karen Huger came ready to fight after butting heads all last season. Most recently, Gizelle, 50, felt that Karen, 58, owed her an apology for constantly questioning her relationship with ex-husband Pastor Jamal. (Gizelle and Jamal were back together at the […]