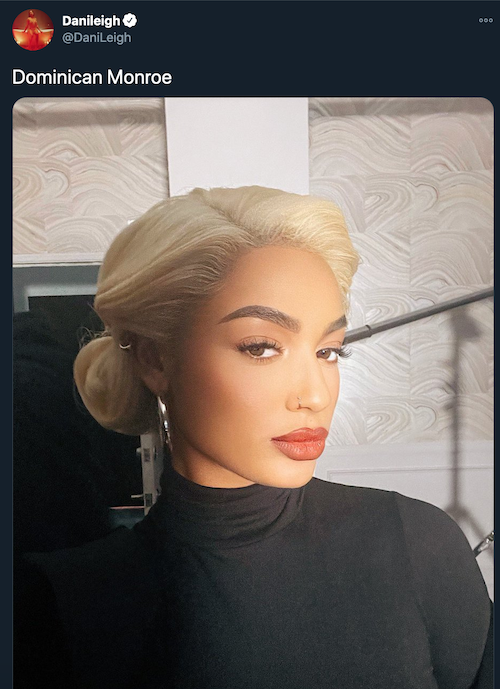 DaniLeigh issues an apology in response to the never-ending Twitter dragging over her new track titled “Yellow Bone.” However, Black Twitter isn’t here for it. More inside…

Singer DaniLeigh has been getting dragged relentlessly on social media after she previewed her new song “Yellow Bone.” *face palm*

Her original post has been deleted, but here’s what she posted that launched the backlash:

In the caption she wrote, “Why I can’t make a song for my light skin baddies?? Why y’all think I’m hating on other colors when there are millions of songs speaking on all types.. why y’all so sensitive & take it personal…gahhh damn.”

The 26-year-old singer – who says ‘n*gga” excessively – isn’t even BLACK. More on that in a minute.

“Yellow Bone” is a termed used in the African-American community that refers to a light-skinned Black person. Many felt the track was offensive due to the colorist lyrics. We’re not sure who told the Dominican-American singer to do this, but no one asked for it. And folks are making sure she knows it…respectfully.

On the track, she sings:

Prada, me in Saint Laurent

We’d like to note, the song was likely created due to her own insecurities. She’s currently dating rapper DaBaby, who has a brown/dark-skinned ex/child’s mother named MeMe who he is seemingly in an off and on love triagle with. Their daughter is brown skinned as well.

The backlash became too much for DaniLeigh as she deactivated her Twitter for a while before reactivating it.

In her apology video, she attempted to make folks believe she isn’t colorist because she dates a “chocolate man” and has “beautiful dark-skinned friends.” You’ll notice she’s rocking blonde box braids, a staple hairstyle in the black community.

“I think people twisted it into thinking, like, I’m trying to bash another woman, another skin tone, that was never my intention,” she said. “I wasn’t brought up like that, I never looked at my skin as a privilege. I never looked at me as ‘I’m better than somebody because of my skin tone,'” she continued.

”I see brown skin women flaunt their skin all the time in music, why can’t I talk about mine? If you look at me, I’m light-skinned, I’m a yellow bone. In my opinion, that’s just what I am. So, it wasn’t something that I looked at so deeply. Which, I can see why people will take it deeply, so I understand and I’m sorry that I wasn’t sensitive to the topic when I wrote my comment ‘why are you guys taking so personal?’ Because, it can be a personal thing to certain people, because colorist is a real thing so I do get it. But I’m not that. I’m not a colorist. I’m not a racist. I date a whole chocolate man. I have beautiful dark-skinned friends.”

Peep her full apology below:

Ma’am! Dark skinned men are colorists as well. Dating one doesn’t automatically mean you aren’t a racist or colorist. *rolls eyes* And you don’t see color, but you’re calling yourself a “yellow bone” and DaBaby a “chocolate man?” Make it make sense.

Also, songs like Beyonce’s “Brown Skin Girl” were created because brown/dark-skinned women are hardly ever celebrated mainstream and Bey wanted to create a ballad young, BLACK girls can be proud about. Never implying brown skin was BETTER and never praising brown skin as a topic centered around the affections and admirations of a man. She can’t say the same about “Yellow Bone”.

Society equates beauty with its proximity to whitness and that’s no secret. Promoting that concept in any way is the equivalent of upholding the contruct of colorism.  The two songs are NOT the same.

She previously posted a pic of her parents, which Twitter users didn’t waste any time pulling up again:

She reportedly called herself Afro-Latina at one point, we guess because a minuscule amount of her DNA was traced back to the continent of Africa (as most people in the world’s are).

DaniLeigh’s Ancestry DNA results. It’s not just 12% as some people are saying but she’s definitely not a Black woman. She’s weird. pic.twitter.com/LCtmsvtW7k

Twitter users scrolled back down her timeline and found her post where she shared her Ancestry DNA results and, yeah. Many don’t consider her a black woman. Especially if she’s only going to be black when it’s convenient.

Rapper Chika directly called DaniLeigh out on her ish:

no shade. as a black woman, you should be more than aware of colorism & why this song wouldn’t sit well with a black audience. it doesn’t feel good having a billion people at your neck, but it’s not about being “canceled.” it’s about taking accountability.

“this is a terrible response to valid criticism,” she tweeted to Dani. “no shade. as a black woman, you should be more than aware of colorism & why this song wouldn’t sit well with a black audience. it doesn’t feel good having a billion people at your neck, but it’s not about being “canceled.” it’s about taking accountability.”

Love how she always keeps it real.

Needless to say, Black Twitter has been letting DaniLeigh HAVE IT on social media. Here are some reactions to “apology” below:

Bronzer & blackfishing is really f’ing y’all up out here. https://t.co/Ta8jfTyZi1

Well how the hell you know you yellow? pic.twitter.com/GQXxOTOgKs

Someone called Dani Leigh a conquistador and I am dead pic.twitter.com/WZT9Y18eaz

Dear DaniLeigh, I too am a yellow bone. pic.twitter.com/8U0e5Rahcf

So Danileigh called Dababy a “Chocolate” man?? In an apology for being a colorist? Ok pic.twitter.com/W36zH2KnE4

Danileigh made an “apology” video where she wore box braids, spoke in a blaccent, denied understanding colorism or light skin privilege, and said she had “melanated” friends so she couldn’t be racist. Unbelievable lmao pic.twitter.com/oqKSBJuTVF

Dani Leigh got a fake tan and a blaccent in order to get her career, but y’all surprised she colorist. pic.twitter.com/qm6adUEoWr

A BLACCENT (black accent)! We die!

Serves her right. No one asked for this trash song. It’s clear she was trying to flex her “light skin” in an attempt to bash DaBaby’s child’s mother and that ish BACKFIRED.

It’s above us now.

The ladies have jetted to South Carolina for a girls trip and things escalate quickly between “Real Housewives of Atlanta” newbies Drew Sidora and LaToya Ali. Watch it go down inside… Last night episode of “Real Housewives of Atlanta” finally brought the drama viewers had been waiting for. Well, the beginning of the drama. On social media, there has been a consensus that Season 13 – sans NeNe Leakes - so far has been pretty boring. And the ratings back […]