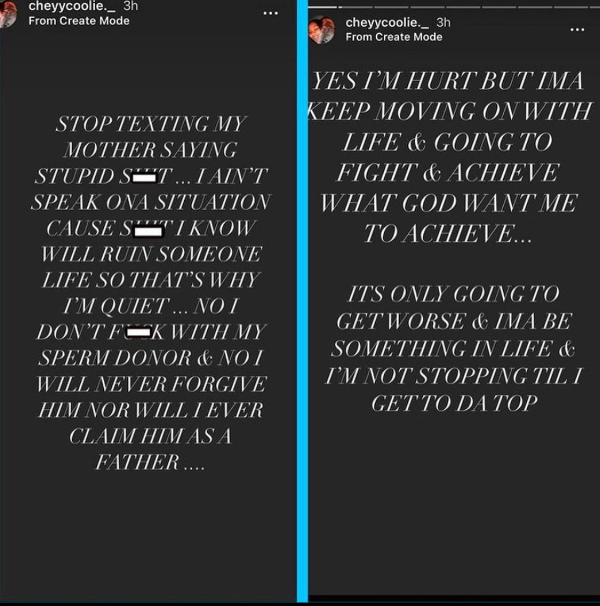 “Black Ink” honcho Ceaser has responded to physical abuse allegations brought up against him by his 16-year-old daughter, Cheyenne. She claims her father dragged her out of the shower while naked, punched and stomped her for not washing dishes. Then, Cheyenne and her mom get into a social media spat with Ceaser’s girlfriend, Suzette. More inside…

2021 rolled around and all hell broke loose between “Black Ink” star Ceaser Emmanuel, his daughter Cheyenne and his girlfriend Suzette!

The 16-year-old daughter of “Black Ink” honcho Ceaser accused her father of physically abusing her, where he allegedly dragged her out of the shower and physically attacked her since she didn’t wash the dishes.

Over the weekend, Cheyenne hopped on social media to share how her father allegedly physically abused her three months ago. In an IG Live video, she said her father broke down two doors to get to her while she was taking a shower.

”He broke my sliding f*cking glass door to get to me and beat the shit outta me. Glass everywhere! He threw the speaker at my f*cking head, ALL OF THAT!,” she said. “He put hands and feet on me!,” she screamed. “I’m a female! I don’t give a f*ck!”

Cheynne accused her dad’s new girlfriend Suzette – who is a real estate agent and former acquaintance of Ceaser’s ex-fiancee Dutchess – of “selling her p*ssy in the Bronx,” not taking care of her kids, doing voodoo on her dad, and scamming. Cheyenne also shared X-rated videos allegedly of Suzette performing sexual acts during her Live.

“The level of disrespect from my father pulling me out of the shower then beating me while I was naked is a problem,” she said. She also shared the police were called.

Watch her intense IG Live below:

After the live, the drama spilled over to IG Stories:

Cheyenne’s mom, Crystal, also responded to the drama to defend her daughter:

Following the incident, Ceaser issued a statement to address the physical abuse claims made by his daughter :

“My daughter Cheyenne and I are not on great terms. However, I would never physically abuse her. I have only done what many parents would have when their child has crossed the line and that is discipline, my child. I love my daughter and she is the only heir to my black ink tattoo studios. She is just having a hard time adjusting to no longer being the only child and having to share her father. I am doing the best I can to make everyone comfortable in our new blended family. I understand that we are on reality tv and our lives constantly play out in the public eye but I hope everyone can respect my family’s privacy while we settle our differences.”

The Black Ink honcho needs to FIX this situation (however that looks)…STAT.

Yesterday, Sonia Tabizada, 36, pleaded guilty to a federal hate crime. What We Know: Back in May of 2019, California native Sonia Tabizada made bomb threats to Georgetown Visitation Preparatory School after the school announced it would make an inclusive move forward and begin publishing same-sex wedding announcements in its alumni magazine. Court documents suggest that Tabizada made multiple threatening phone calls to the school, leaving voicemails stating that she would burn and bomb the church, kill school officials and […]