President Joe Biden and Vice President Kamala Harris address the nation following the verdict in the Derek Chauvin murder trial. He was found guilty on all three counts he faced in the murder of George Floyd. And people REJOICED when the verdict was read.

Go inside to see Biden & Harris’ press conference, their call to the Floyd Family, celebrities & brand reactions to the verdict and more…

People all around the world took a sigh of relief when a jury found former Minneapolis police officer Derek Chauvin guilty on all three counts he faced in the murder of George Floyd.

The 45-year-old former Minneapolis police officer was charged with second-degree unintentional murder, third-degree murder and second-degree manslaughter. The members of the 12-person jury UNANIMOUSLY found Derek Chauvin GUILTY on all three counts. And listen, this is unprecedented. We all witnessed history where the justice system operated as it should and not the way THEY designed.

After the verdict was announced, President Joe Biden and Vice President Kamala Harris held a press conference to address the nation about the case. POTUS called the guilty verdicts a “giant step forward” in the fight against systemic racism. However, “it’s not enough,” he said.

VP Harris made a good point when she said racism is what’s holding this country back from fulfilling its founding promise of “liberty and justice for all.”

“It is not just a Black America problem or a people of color problem. it is a problem for every American,” she said. “It is holding our nation back from reaching our full potential. A measure of justice isn’t the same as equal justice,” she said.

Both Biden and Harris called on Congress to make swift actions in addressing police reform, including by approving a bill named after George Floyd.

Peep their conference below:

Live: President Biden and Vice President Harris address the nation on the verdict in the trial of Derek Chauvin. https://t.co/wNeoPOcvwM

Before addressing the nation Biden & Harris called the family of George Floyd. POTUS told the family he sought to comfort Floyd’s daughter, Gianna, to tell her “Daddy did change the world,” which is in reference to Gianna saying her dad changed the world in a viral video following his death.

When the verdict was read, social media was LIT UP with celeb reactions. See how your faves celebrated the verdict below:

Brands like Ben & Jerry’s & Sephora, as well as the Raiders NFL team, also reacted to the verdict on social media:

Finding one officer guilty does not exonerate a legal system that has perpetually brutalized Black and Brown communities. (2/4)

Tonight, we hold the Floyd family in our thoughts. Tomorrow, with increased rigor, the work to achieve justice continues. (4/4)

The NFL had the NERVE to share a post about creating positive change in society when situations like George Floyd’s is exactly the reason former San Francisco 49ers QB Colin Kapernick took a knee! 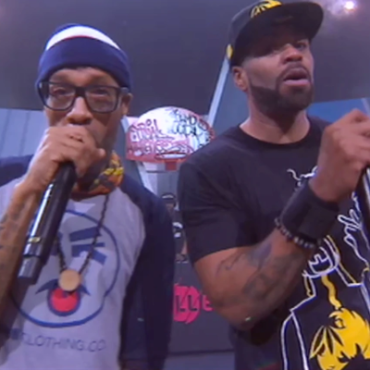 Forget a battle, it was a whole concert! Redman and Method Man hit the stage for their VERZUZ battle and it was the perfect backdrop for a chill 4/20 session. More inside…. Redman and Method Man brought the 4/20 vibes during their “How High” VERZUZ Battle last night, which folks needed after an eventful day. The VERZUZ battle was the ultimate celebration for this year’s 4/20 holiday, especially after former […]