BACK ON AGAIN? Video Model Lanisha Cole Gets ‘King Cannon’ Tat With Nick Cannon, All Boo’d Up On IG

Looks like Nick Cannon and video model Lanisha Cole are back ON. They recently got tatted up together and she copped herself a “King Cannon” tattoo. Oh, they’ve also been all boo’d up on the couch together like a couple. See it inside…

We’re not sure what it is Nick Cannon does to women. But, whatever it is, it’s something powerful. Because the way he hops around in these streets is giving us whiplash.

Last month, he was literally all hugged up with his then-pregnant kids’ mother Brittany Bell. They had just welcomed their second child together – a baby girl – a day after Christmas.

They snapped maternity pics together as well:

Right before that, and even overlapping the Brittney on-again, off again situation, the “Wild N’ Out” honcho was dating model Jessica White. She said she called it off with the father-of-four after she found out his ex- Brittany was pregnant again.

Now, he has another ex-girlfriend getting his name tatted on her body. He’s been boo’d up with video model Lanisha Cole. You may remember her from Pharrell Williams’ “Frontin’” video:

Not precisely the #FirstTimeISawMe but one of the most important/pivotal. Lanisha Cole in the Frontin’ video.Still one of my favourites ever pic.twitter.com/UHqfNthpIE

And she also had a role in Soul Plane:

Lanisha Cole as a Bartender
in the film ‘Soul Plane’ (2004) pic.twitter.com/QDAvSGtHeH

So yeah, these two called in quits in 2017, although they kept their relationship pretty lowkey. Folks found out they were together after Lanisha announced they were calling it quits. Now, they’re seemingly back on. Recently, Nick and Lanisha went to get tattoos together and she decided to get “King Cannon” tattooed under her boob:

Nick got his whole neck tattooed – no mention of him getting Lanisha’s name on him:

They were all boo’d up too in a picture Lanisha put up on her IG Stories:

In 2014, Lanisha was engaged to a white man named Rick Licht. Apparently, she was receiving a lot of hate for being in an interracial relationship, so she issued an open letter to her haters. You can read the letter and also see a picture of her ex-fiance here. Nick & Mariah Carey divorced in 2016. Ever since then, Nick has been on his “gigolo” steez.

Baby #5 on the way? Nick DID say he wanted more kids… 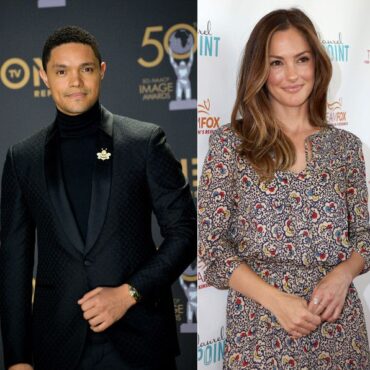 It appears things are getting serious between Trevor Noah and his girlfriend Minka Kelly. He bought a $27.5 million mansion and she’s supposedly moving in with him. Deets inside… Moving in together? Must be serious! Trevor Noah and Minka Kelly are taking their relationship to the next level…if what these sources are saying is true. According to PEOPLE, the “Daily Show” host copped a $27.5 million mansion last month and […]