Serena Williams and Naomi Osaka are set to go head-to-head in the Australian Open semi-finals! More inside…

Almost three years after Naomi defeated Serena during the women’s 2018 U.S. Open finals (Naomi’s first Grand Slam win), two of the biggest stars in tennis are set to battle it out on the court again.

The 39-year-old tennis vet advanced to the semi-finals after beating Romanian player Simona Halep. Now, Serena is gunning for her historic record-tying 24th Grand Slam title, but she’ll have to beat the 23-year-old tennis phenom Naomi Osaka to do so. The #BlackGirlMagic Battle is set to go down tonight at 10pm EST with fans anticipating an epic game.

“I feel good, I feel like … I’m here, I’m happy to be here, and I gotta keep going, that’s obviously the goal,” Serena said about her opponent Naomi. “Obviously, I have an incredible opponent to play, so it’ll be nice to hopefully keep raising the level of my game – I’m going to have to.”

“I feel like she does everything well, she has a good serve, she has a great return, she’s strong on both sides,” she continued.

If Naomi beats Serena and goes on to win the Grand Slam title, it’ll be Naomi’s fourth Grand Slam title. If Serena wins, it’ll mark her record-tying 24th Grand Slam title win. Right now, Margaret Court holds the title of 24 Grand Slam singles titles and Rena has been gunning for the 24th title since 2017, even more so after giving birth (and almost dying) to her daughter, Olympia, in 2017.

The matchup is Serena and Naomi’s first game against one another since the 2018 U.S. Open match.

You can watch the Serena vs. Naomi match tonight at 10pm EST on ESPN 2. You can also stream the game on fuboTV, Sling, AT&T TV, Hulu + Live.

Reddit co-founder Alexis Ohanian – Serena’s husband – has been STANNING out for his wife during the Australian Open, per usual. He wore a t-shirt that featured a picture of Serena on the tennis court with the slogan, “Greatest Female Athlete” with female crossed out. If our man doesn’t support us like this, we don’t want him!

Little Olympia has been getting in tennis lessons with Serena’s tennis coach/ex-boyfriend Patrick Mouratoglou. 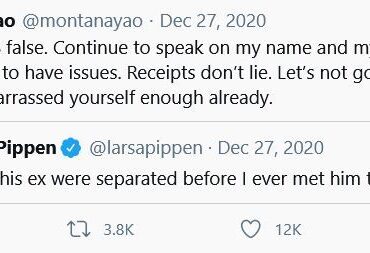 Larsa Pippen is still defending her choice to date married NBA player Malik Beasley. Oh, and she’s also talking about the Kardashian Klan again, reminding them to lay low when it comes to speaking on her name. More inside… One thing about Larsa Pippen (top left, above), she knows how to stir up drama and get her name in the headlines. The 46-year-old former “Real Housewives of Miami” star (who’s […]