Asian Doll, City Girls TURN UP & Are Ready To Fight After Asian Revealed She Was Taken Off Megan Thee Stallion’s Track 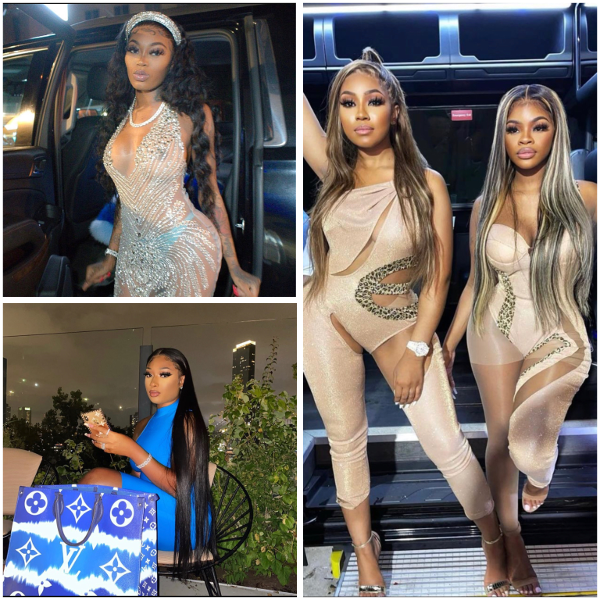 The ladies of rap had Twitter in a frenzy! First, City Girls rapper JT popped off on Asian Doll, causing Asian Doll to respond aggressively while spilling tea on her fellow female rappers, including her (former?) friend Megan Thee Stallion. Get it all inside…

The rap ladies have been going at it on social media over the weekend. The reason? Well, it seems like the drama is over a Megan Thee Stallion track and built up shade that has been brewing. So, here’s what happened.

On Friday, Asian hopped on Instagram Live to chat it up with her fans about a track she had been taken off. She laid a verse for for Megan Thee Stallion’s “Do It On The Tip,” from her Good News album, but her verse was taken off the song. It’s unclear if Meg took Asian off the track and replaced her with the City Girls, but the City Girls are featured on the track on the released album.

Peep the clip of Asian playing her verse below:

#asiandoll plays unreleased verse that was supposed to be on Megan thee stallion album for the song called “do it on the tip” but her verse was removed and was replaced by the #citygirls instead #hiphopmusic #celebritynews #celebritygossip #entertainment #megantheestallion pic.twitter.com/q887vyuhdq

After the IG Live, Asian hopped on Twitter to clarify that she and Meg were still friends despite how the song situation ended up.

“Me & Megan still friends idgaf about no song I did in my sleep,” she tweeted (and deleted).

Then, JT entered the chat. She first started posting subliminals about people not knowing how to be real friends.

“A real friend is something you b*tches really don’t know nothing about!,” JT tweeted (and deleted).

“I been doing good but I’ma bout to start laying you attention seeking hoes out & I’m coming with facts,” JT continued tweeting. “Sympathetic ass hoes really starting to grind my gears. Like, if you know you gone draw attention and cause commotion why speak on it? Mind you lying! But go off.”

JT deleted all of the posts, but that didn’t stop Asian from responding.

Since JT didn’t @ Asian or mention her name, the “Nunnadatshit” raptress tweeted:

“If JT ain’s say my name then she wasn’t talking to me stop being messy cause what I said was between me & Megan!”

Asian was on Twitter tweeting about how pretty she is and that’s when JT replied to her tweet:

“Get a pretty hit record hoe, buoy got the right one!,” JT tweeted in direct response to Asian’s “pretty” tweet.

That’s when Asian went clean off on JT, saying JT has always been a fan of hers, made claims JT confirmed Asian was the first to say “period” on a track, said she’s chasing rapper Lil Uzi Vert to publicly claim her (and says he doesn’t want her), ad said the City Girls don’t write their raps with claims that Lil Yachty is the person who wrote “Act Up,” which ultimately put them on the map. Asian also said JT sucked Yachty’s d**k for the track and made claims that JT had sex with Quality Control honcho Pierre “Pee” Thomas to get put on.

Naturally, Yung Miami jumped in to defend her friend.

Peep some of the back-and-forth tweets and IG Lives below:

Asian went on IG Live and said she didn’t like how Meg didn’t dead the beef when it first started. She said all Meg had to do was speak on the situation and it would have been deaded. After everything started blowing up, Meg did eventually enter the chat, calling the drama “dumb.”

”We was real friends f*ck rap you Should’ve said some yesterday & cleared sh*t up byt NO you let that h*e get in your ear & you don’t even kno that h*e,” Asian tweeted.

”Asian you kno me better than that you kno I don’t like all this internet shit. You blow shit out of proportion bc you a fucking hot head. You played the song on live that was that … what do I need to clear up? This is dumb,” Meg responded (and deleted).

Sadly, 2020 has been one hell of a year for Asian. She recently lost her first boyfriend King Von (they were broken up at the time of his death), her mother is sick, her father died, and she was involved in a scary car accident.

Asian tweeted she was ready to FIGHT because she was tired of the back and forth on social media. JT said she wasn’t down to fight, but Yung Miami claims she was in midtown (in Miami) and would meet up. Nothing came of that though. Thankfully.

Saucy Santana and Rolling Ray also got caught up (or inserted themselves) in the drama:

There’s a tweet circulating that shows Yung Miami tweeting, “on King Von,” referencing Asian’s ex-boyfriend, who was murdered last month. Some say the tweet is fake and some say it’s real.

Ish went all the way left when Rolling Ray responded to Yung Miami (Caresha) about digging up her dead baby’s father Jai:

We hope this drama stays on the Inernet and doesn’t trickle out in these streets!

The 2020 U.S. Census hasn’t officially been counted. The experts fear the results will be uncertain, saying, and think they should hold off on the counting. What We Know: According to NBC News, the census, which is required every 10 years by the Constitution, is used to determine how many members of Congress each state gets in the House of Representatives. The data are also used to calculate local governments’ share of $1.5 trillion in many federal programs. For example, […]