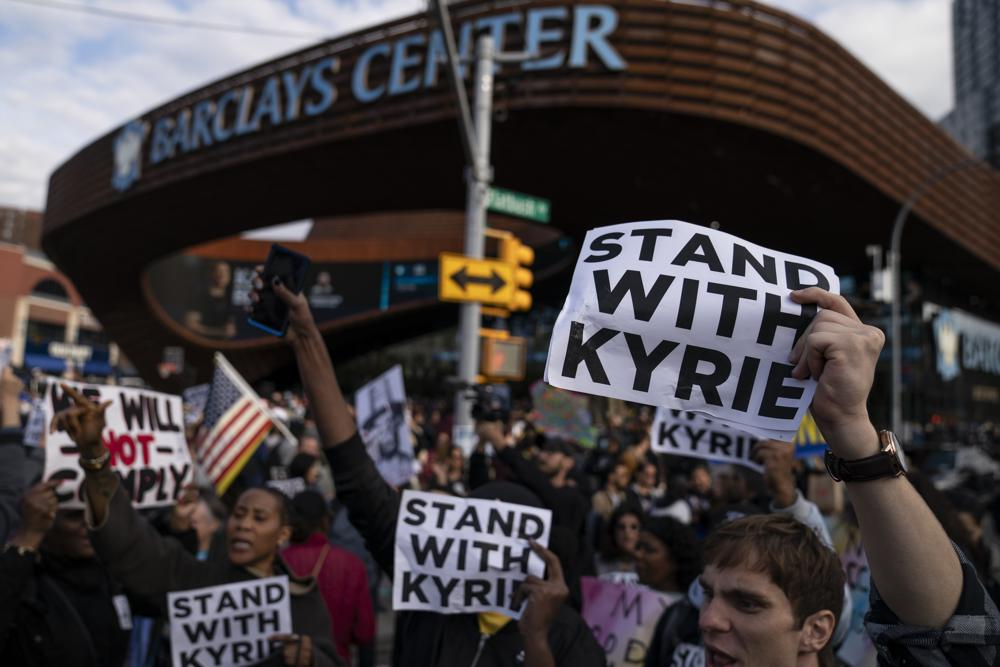 The Barclays Center was placed on lockdown amid a protest launched by anti-vaxxers who came out to show support of NBA star Kyrie Irving for refusing to get the COVID-19 vaccine to play. At least for now.  More inside…

Tons of folks were yelling this chant outside of the Barclays Center in Brooklyn yesterday (October 24th) ahead of the Nets’s season home opener against the Charlotte Hornets. The Kyrie Irving “liberation” has begun and they’re DEMANDING the Nets baller be allowed to play despite his reluctance to get the COVID-19 vaccination.

The Nets announced the All-Star guard will NOT play until the situation is resolved. At first, the 29-year-old NBA star was barred from playing Nets home games due to New York COVID protocols. As you can see, the Nets are taking drastic measures in an effort to keep all of the players and their families safe, requiring all players to be vaccinated in accordance with New York state law for public venues and restaurants.

Protesters wore shirts and held up signs that read “Stand with Kyrie,” “Don’t tread on me,” “Will not comply,” and “Health Freedom Now.” Some even wore “Black Lives Matter” t-shirts.

Things got so out of hand, the Barclays Center was placed on a brief lockdown. Some protesters were able to get inside, forcing the center to shut the front doors. The police and arena personnel were able to gain control a few minutes later and started letting vaccinated ticket holders inside.

It was a mess. Watch folks WILD OUT below:

Kyrie Irving supporters protested and tried rushing the Barclays in support of Kyrie refusal to get vaccinated thus far. pic.twitter.com/UJdAo9V05m

MAGA and BLM at Barclays for anti-vaccine mandate protestpic.twitter.com/CGadvfxEPf

Following the chaos, the Barclays Center https://nypost.com/2021/10/24/mob-of-anti-vaxxers-storm-barclays-center-… “>released a statement to address the lockdown:

“Barclays Center briefly closed its doors today in order to clear protestors from the main doors on the plaza and ensure guests could safely enter the arena. Only ticketed guests were able to enter the building and the game proceeded according to schedule.”

Famed boxer Floyd Mayweather posted a video in Kyrie’s defense. Check it out above.

Last week, Kyrie – who joined the Nets in 2019 – hopped on IG Live to explain why he has decided NOT to take the vaccine. At least for now, as many believe his statement was also leaving open the possibility of getting it and covering his tracks, so he isn’t dragged for back tracking.

Kyrie, who also was willing to die on a hill years ago with claims the earth is flat, says he has “more questions,” but has not specified what these questions are almost one year into the vaccine rollout.  How do you feel about Kyrie not taking the vaccine? Sound off in the comments! 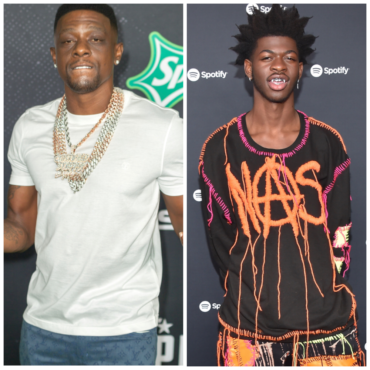 We already crowned him the King of Internet Trolls. And based on Boosie's vile reaction over the weekend, Lil Nas X still holds the crown. Find out why Boosie went on a homophobic rant where he told the MONTERO artist to kill himself inside... Ever since Lil Nas X made out with a male backup dancer during the 2021 BET Awards, rapper Boosie Badazz has been popping off on social […]