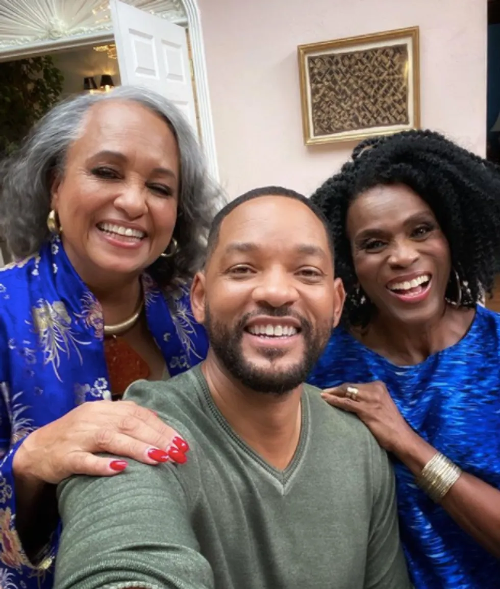 Now that Janet “Original Aunt Viv” Hubert has squashed her decades-long beef with Will Smith, the actress/dancer is opening up more about her life post-Fresh Prince of Bel-Air. Get into Janet’s candid admission inside…

Before wrapping up 2020, “Fresh Prince of Bel-Air” fans got the reunion we all wanted (and needed) when the show’s star Will Smith and the original Aunt Viv, Janet Hubert, hashed out their issues. The reunion went down during the 30th anniversary of the show on a HBO Max reunion special.

During the reunion, Janet shared some of what her life was like after her traumatic departure from the hit 90s sitcom. She was fired from the show before the series’ fourth season. The reason? It was believed she was too difficult to work with.

Now, she’s opening up even more.

In an interview with Chris Whitherspoon’s “PopViewers,” the original Aunt Viv got candid about her struggles following her exit from the series. After losing her gig, she went through some dark times as she struggled to make ends meet with an infant son. She also had embarked on a new business venture right before the firing, putting her in an even worse spot financially.

“We also know that you can make money and the next day you can have no money. I also had just opened up a studio. I signed a 10-year lease at like $60,000 to $100,000 worth of equipment,” she went on. “I had a franchise to develop. I not only had a house, a mortgage, a husband who wasn’t working at the time, I also had a business and a baby, an infant who needed me desperately.”

Being a first-time mother gave her the strength to keep fighting and to solider through whatever life obstacles were thrown her way for the sake of the young man she was raising.

“He saved me. He really did. My son. Because I knew I had to take care of that little boy. ‘Fresh Prince’ had not gone into syndication yet, so there was no money for a few years until they did enough episodes to make syndication. I was in the third season negotiating for the fourth season. It was hard. There were moments when I felt so broken. So low. I didn’t know what I could do. There were moments where I wanted to die.”

“Absolutely, because I figured I had a life insurance policy that would take care of my son.”

During that time, she was also arrested after a tenant pulled a gun out on her and she pulled HER gun out on them after they tried to accuse her of stealing from her own property. She said the tenants used the “Fresh Prince sh*t” against her and whipped out their firearm. During this time, she said she thought she was “going to have a nervous breakdown.”

The actress/dancer also talked about how she got into Hollywood – first dominating Broadway productions and how she dealt with colorism. Oh, and she also explained why she doesn’t like D.L. Hugley (at the 29-minute mark) and dished on her new animation project she has coming down the pipeline (at the 43-minute mark).

Peep the full interview below (she talked about suicide at the 19-minute mark and colorism at the 14-minute mark):

We’re glad she’s in a better space in her life and flourishing.