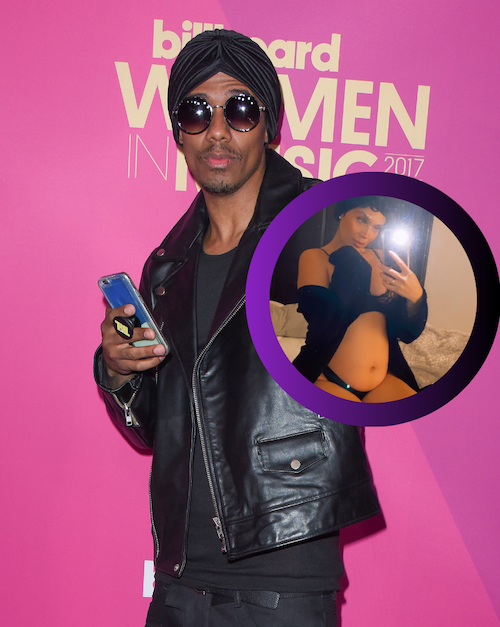 DJ Abby De La Rosa has been coy about whether Nick Cannon is the father of her twin boys on the way, and she’s seemingly confirmed what we figured to be true.  Deets inside.

It all led folks to believing he got all three women essentially the same gifts.  And all three women seemed to be speaking of Nick in quite romantic ways – with Abby and Brittany not naming him outright.

When folks realized the very harem-esque behavior, Nick deleted his Instagram and Lanisha deleted her pics with Nick while posting cryptic messages about their relationship being over.  That only lasted for about 24 hours though, since Lanisha later posted herself at his home chillin’.

Brittany and Nick welcomed their youngest child together just a few months ago. Abby, a DJ who worked with Nick previously in the radio world, then started hinting he’s also the father of her twins OTW.

Now, Abby’s confirming it ever so subtly after the gender reveal.  You can see a man’s hands – that look to be Nick’s – in her video.

Last night, Abby put up his NCredible logo while DJ’ing a set for her babies in utero, saying she’s playing “daddy’s picks” all night.  Hmph.

Welp, it looks like Nick has twin boys due any day now. Congrats to Nick and Abby, if true.

T.I. & Tiny’s Alleged Sexual Assault Scandal Is Stopping The Bag? T.I.P. Will NOT Return For ‘Ant-Man 3’

The sexual abuse allegations are starting to hit T.I.’s pockets. It’s been reported the Atlanta rapper will NOT return to star in Ant-Man 3. Deets inside… T.I. and his wife Tameka “Tiny” Harris’ sex abuse allegations are starting to hit their pockets. First, MTV Entertainment halted production of their VH1 family-oriented reality series, “T.I. & Tiny: Friends & Family Hustle.” Now, Tip has been axed from the third installment of Ant-Man. According to The Hollywood Reporter, T.I. (real name Clifford […]