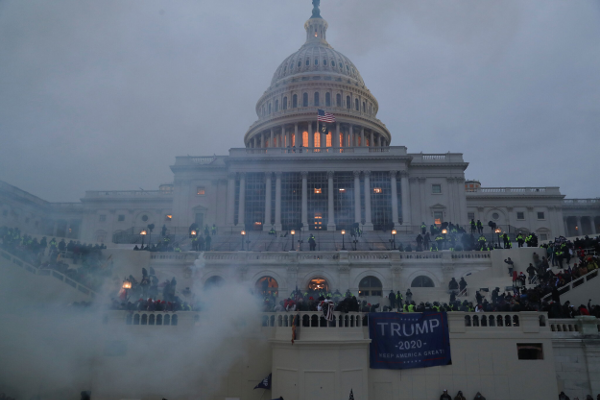 13 people who helped incite a riot at the U.S. Capitol earlier this week have been hit with federal charges. At least six Republican lawmakers participated in the events surrounding the attempted insurrection. Also, police found a truck filled with bombs and guns. Everything inside…

January 6, 2021 will go down in history as one of America’s most embarrassing moments of all time.

Hundreds of Trump supporters stormed the Capitol where they fought with Capitol police, trashed offices, stole things, scaled the walls, and sprayed fire extinguishers as lawmakers took cover by hiding and barricading themselves in offices. It was a failed coup attempt as the #MAGA mob tried to stop the electoral vote count so they could delay the official announcement that President-elect Joe Biden and Vice President-elect Kamala Harris won the 2020 election.

As a result, five people died during the shocking and violent attack of the U.S. Capitol, including one U.S. Capitol officer.

Following the failed coup attempt, the FBI is seeking to identify individuals involved in the violent activities that occurred at the U.S. Capitol and surrounding areas on January 6th.

Do you see anyone you recognize? The #FBI is still seeking information to help identify individuals who actively instigated violence on January 6 in Washington, D.C. Visit https://t.co/o9rDVDsk5S to see images from current cases, and submit tips to https://t.co/buMd8vYXzH. pic.twitter.com/R9JqN8TqpP

People have been going off on social media about the FBI reaching out to the public to find these people when tons of Instagram accounts have been exposing folks from the #MAGA mob.

Thirteen domestic terrorists have been charged so far in federal court in the District of Columbia related to crimes committed during the attack on the U.S. capitol, according to the DOJ. Some of the charges include unlawful entry, assault on a federal law enforcement officer, and violent entry and disorderly conduct on Capitol grounds.

In addition to those who have been charged, additional complaints have been submitted and investigations are ongoing.

“The lawless destruction of the U.S. Capitol building was an attack against one of our Nation’s greatest institutions,” said Acting U.S. Attorney Michael Sherwin. “My Office, along with our law enforcement partners at all levels, have been expeditiously working and leveraging every resource to identify, arrest, and begin prosecuting these individuals who took part in the brazen criminal acts at the U.S. Capitol. We are resolute in our commitment to holding accountable anyone responsible for these disgraceful criminal acts, and to anyone who might be considering engaging in or inciting violence in the coming weeks – know this: you will be prosecuted to the fullest extent of the law.”

One of the terrorists hit with federal crimes is a suburban Chicago man/CEO of a data analytics firm.

Also, the Capitol mob member who lounged at Nancy Pelosi’s desk and stole mail out of her office was also arrested.  Richard Barnett, of Arkansas, was charged on Jan. 7, 2021, with “knowingly entering or remaining in any restricted building or grounds without lawful entry; violent entry and disorderly conduct on Capitol grounds; and theft of public money, property, or records. Barnett allegedly entered a restricted are of the Speaker of the House Nancy Pelosi.”

The 60-year-old turned himself in at the Benton County Sheriff’s Office on Friday morning and is currently in FBI custody.

That’s Richard “Bigo” Barnett, 60, from Gravette, Ak., showing off the personalized envelope he took from Speaker Pelosi’s office. He insisted he didn’t steal it — “I left a quarter on her desk.” pic.twitter.com/aST7MCoRwP

“The shocking images of Mr. Barnett with his boots up on a desk in the Speaker of the House’s office on Wednesday was repulsive,” said Jeffrey A. Rosen, Acting Attorney General of the United States. “Those who are proven to have committed criminal acts during the storming of the Capitol will face justice.”

“This case is just one in a number that demonstrate the brazen acts that were committed at the Capitol on Wednesday,” said Michael Sherwin, Acting U.S. Attorney for the District of Columbia. “My Office is committed to prosecuting all individuals who participated in these abhorrent acts to the fullest extent of the law.”

Barnett is scheduled to make his initial appearance in federal court on Tuesday. He will ultimately be extradited to Washington, D.C.

Adam Johnson has been arrested. pic.twitter.com/RIuItugpqL

The man in viral photo carrying Nancy Pelosi’s lectern during the riot has been arrested.

Parrish resident Adam Christian Johnson, the man captured in a viral photo carrying Speaker Nancy Pelosi’s lectern from House chambers during the riot at the U.S. Capitol on Wednesday, has been arrested.

Johnson, 36, was booked into the Pinellas County jail on Friday night. According to jail records, he is being held on a federal warrant.

The FBI had been searching for Johnson, who was quickly identified on social media by local residents as the man seen in the photo carrying the lectern during the riot.

According to one of Nancy Pelosi’s aides, her laptop was stolen from her office during the riot. Drew Hammill, an aide to Democrat Pelosi, said on Twitter that the laptop belonged to a conference room and was used for presentations. He declined to offer further details.

Another computer was also reportedly stolen. The Guardian reports:

At least one other computer was stolen, a laptop belonging to the office of the Democratic senator Jeff Merkley, of Oregon. The acting US attorney, Michael Sherwin, said that some of the thefts might have potentially jeopardized what he described as “national security equities”.

These security breaches are only growing more fear about cybersecurity.

During the riot, the feds claim D.C. police found a truck filled with pipe bombs, guns and ammo. CNN reports:

An Alabama man allegedly parked a pickup truck packed with 11 homemade bombs, an assault rifle and a handgun two blocks from the US Capitol building on Wednesday for hours before authorities ever noticed, according to federal prosecutors.

Another man allegedly showed up in the nation’s capital with an assault rifle and hundreds of rounds of ammunition and told acquaintances that he wanted to shoot or run over House Speaker Nancy Pelosi, prosecutors said.

The revelations are some of the most unsettling details federal prosecutors have made public this week as they detail the extent of the arsenal available to aid pro-Trump rioters who stormed the Capitol. Other individuals have been accused of taking guns and ammunition onto Capitol grounds and more charges are expected to come as a wide-ranging investigation unfurls.

By the way, U.S. lawmakers were also in the #MAGA mob mix.

Hmph. It’s time to vote these people OUT!

A fight nearly broke out on the House floor after Republican objectors refused to hear the truth from Rep. Conor Lamb pic.twitter.com/nap1L4b3lF

A fight nearly broke out early Thursday morning as the congressional count of electoral votes stretched into the wee hours after the riot foolishness.

Rep. Morgan Griffiths, R-Va., objected after Rep. Conor Lamb, D-Pa., said a breach of the Capitol by an angry mob earlier in the day was “inspired by lies, the same lies you are hearing in this room tonight.”

Watch the heated exchange above.

Sen. Lindsey Graham (R) was also verbally harassed by a group of Trump supporters at Reagan National Airport yesterday after his public break with the president. Watch the clip above.

Go INSIDE the 2021 U.S. Capitol riot in the gallery below!

Some Good-Ass Games at Good-Ass Prices for a Totally Normal, Not at All Horrific Week